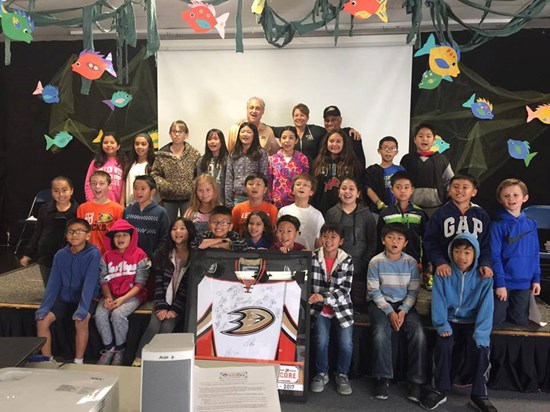 March 14, 2017, Midway City, CA, Sports legend, 81 year old Willie O'Ree, the first black hockey player in the National Hockey League, along with Anaheim Ducks announcer Steve Carroll, visited 4th and 5th grade students at Star View Elementary School today! The assembly is part of the Ducks' S.C.O.R.E. school assembly program, focusing on the Hockey Is for Everyone initiative. O’Ree played his first NHL game in 1958 with the Boston Bruins. He was inspired by the great Jackie Robinson meeting him at age 14 when Mr. O'Ree was a member of a championship Little League baseball team visiting NYC from New Brunswick, Canada and again as a professional hockey player in Los Angeles. Students learned about O'Ree's career, both on his path to becoming a pioneer ground breaking figure in the NHL, as well as his commitment to growing the sport in accordance with NHL's Hockey Is for Everyone initiative. Mr. O'Ree played professional hockey for 21 years, even after going blind in his right eye at 19 years old, after he took a violent puck to his face during a game. He said, "losing my vision was hard, but nothing compared to what I had to overcome with the racism, prejudice, and bigotry of the times, I persevered and kept playing." The assembly highlighted topics such as childhood dreams, breaking barriers, and leaving a legacy. Star View students studied O'Ree in their classes and had the chance to ask questions at the end of the assembly.