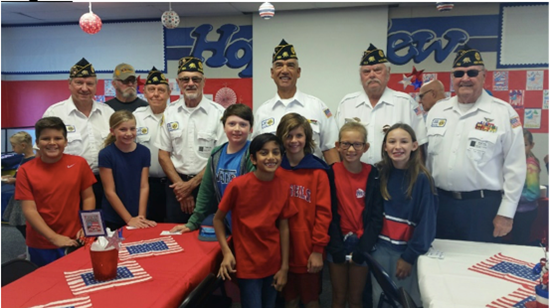 Huntington Beach, CA-Hope View School held a special Veterans’ Day Flag Assembly in November.Approximately 75 veterans and active military men and women who are relatives of Hope View students attended the assembly, as did members from the American Legion Post 133 and Veterans of Foreign Wars. The Cub Scouts led the pledge of allegiance, followed by a speech from Principal Kraft. The entire student body then sang “Proud to be an American.” Military and special guests were treated by the PTO to a delicious breakfast in the MPR. A special thank you to the PTO for organizing the event. (Photo: Students from Mrs. Sidell’s fifth grade class along with members of American Legion Post 133.)